How to fix the Antenna mast and grommet on the 1986 and later XJS, and the 1988 and later XJ6 Jaguars 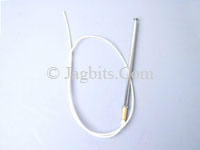 The 1986 and later XJS, and the 1988 and later XJ6 have a replaceable antenna mast and drive cable assembly, so if the aerial is broken off or malfunctions, it's a relatively inexpensive fix (prior to this, you had to buy a whole antenna unit for a couple of hundred dollars.

The antenna mast goes up and down by the use of a plastic drive cable. The "teeth"on the drive cable engage with the antenna motor, which allows the motor to move the mast up and down. When your mast gets sticky or otherwise uncooperative, it's a sign that the mast and drive cable assembly needs replacing. When you replace this assembly, be sure to also replace the rubber antenna grommet that seals the mast against the fender. These get hard and crack, allowing water to leak into the trunk area.